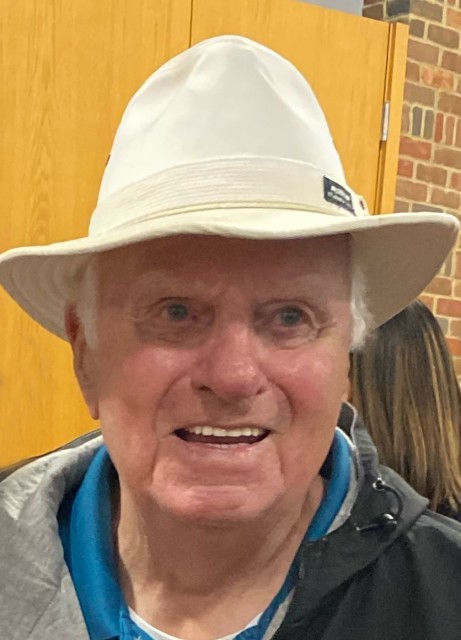 Patrick Carlton “Mick” Martin, age 89, of Belmont, went to be with his Lord and Savior on November 27, 2022. He passed peacefully at home with his family by his side.

Mick was born on September 10, 1933 to Carlton Martin and Margaret Crowley in Comstock Park, MI. Mick attended Comstock Park High School where he competed in many sports. For nearly 70 years he has been married to the love of his life Nancy (Vereecken). Together they raised five children.

Following high school, Mick joined the United States Army and served his country proudly. He later worked on the railroad. Eventually he became an entrepreneur and started numerous businesses. His last years before retirement were spent working with his sons at West River Carpets.

Mick was a man of many passions. And all of them had something to do with sports. He loved watching and participating in many sports including track and field and football. He taught most of his grandkids how to golf. He played in a seniors’ softball league. He would sit for hours helping kids learn to shoot a proper jump shot or gain an inch on their vertical. And even if he was not previously fond of a particular sport or activity, if one of his children or grandchildren competed in it, he became an instant fan and their biggest cheerleader.

Mick loved his family more than anything in the world. And they loved him. He was dedicated to always being there for them. He was a man of great devotion and faith in Jesus. As such, he was a man dedicated to helping others in need.

Relatives and friends may meet the family on Thursday, December 1, 2022 from 2-4 and 6-8pm at the MKD Stegenga Chapel, 1601 Post Dr., Belmont, 49306. Memorial services will be held at noon on Friday, December 2, at City Church Rockford, 3233 10 Mile Rd. Rockford, 49341. Those who wish may make memorial contributions to Mel Trotter Ministries https://www.meltrotter.org/get-involved/donate-now/give-today/. The family wishes to thank Spectrum Health for their care and concern shown to Mick.

Leave Your Tribute
November 29, 2022 12:25pm
Mick was Grandpa Mick to our Family. He made a big difference in our lives! Without his encouragement, Paul would never had been a State Hurdle Champion for Rockford. Our Son, was helped along with strength training Mick paid for. As a result, Callan achieved his goals in Football becoming a 2 time State Champ for Rockford. DeAnne used to love to watch Mick and John Vereecken play pick up basketball in the gym. She marveled over their stamina. If you were loved by Mick it was a special love. You were Family. Our deepest sympathy to Grandma Nancy, Jerry and Deb and the entire Martin Clan. God Bless and comfort you in your grief.

November 28, 2022 6:20pm
We were so sorry to hear of Uncle Mick's passing. Him and Aunt Nancy always held a special place in our hearts. Sending all of you hugs.