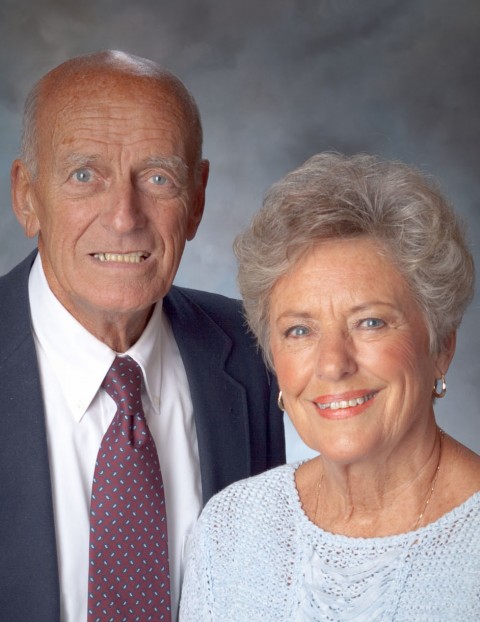 Larry Randall (Coach), age 84, of Jenison, went to be with his Lord and Savior on Friday, December 3, 2021. Larry was born in 1937 in Elkhart, Indiana to Lawrence and Loraine Randall. At Elkhart High School he lettered four years in baseball and was team captain his senior year. He also played one season of basketball. After graduation, he received an athletic scholarship to Western Michigan University where he played baseball as a Bronco. Larry appeared two years in the college World Series, finishing in third place in 1958 and in fourth place in 1959. He graduated with a B.S. degree from WMU in 1961. Larry signed a professional baseball contract with the San Francisco Giants. After spending two years in the minor leagues (A), he was traded to the Minnesota Twins and sent to their minor league Double AA team. Five years later, Larry received a teaching fellowship from Indiana University where he received his M.S. degree. Over the following years, he both taught and coached at several high schools: Romeo HS in Romeo, MI; Bullock Creek HS in Midland, MI; Jenison HS in Jenison, MI; Jefferson HS in Goshen, IN; and University HS in Kalamazoo, MI. While at Jefferson and Jenison high schools, he also served as athletic director. One of his achievements at Jenison HS was to start a full girl’s athletic program, one of the top in the state. Larry went on to be an assistant coach for basketball at Western Michigan University, Kalamazoo College, and Ferris State University before becoming varsity coach at Aquinas College. Larry was inducted into the athletic hall of fame at Aquinas with his 1988 team with a 23-7 record; a season where they lost their first four games and then went 23-3 for the remainder of the season. In springtime he was a baseball/softball umpire for both college and high school levels, and also spent time as a basketball official. After 40 years of teaching, 38 years coaching, and 35 years of working basketball, baseball, and softball programs, Larry retired. He is survived by his wife of 39 years, Louise (Hart) Randall, whom he loved beyond measure. He also leaves behind his children: Cam Randall, Matthew (Lori) Randall; stepchildren: Kevin DeJonge, Brad (Mary) DeJonge, and Greg (Jan) DeJonge; grandchildren: Mackenzie Randall, Jake Randall, Jeff (Audrey) DeJonge, Steve (fiancee, Hillary) DeJonge, Amanda (Tony) VanGeest, Alex (Kelly) DeJonge, Caleb (Hannah) DeJonge, Ross DeJonge, Melissa (Pete) Hilzey, Taylor (Hannah) DeJonge; 15 great-grandchildren; brother-in-law and sisters-in-law, Jerry (Elaine) Hart and Julie Sjoerdsma. Larry was a longtime member of Rosewood Church. “The next ride will be the best of all.” According to his wishes, cremation has taken place and a memorial service will be held 1 p.m. on Thursday, December 9, 2021, at Rosewood Church, 2795 Rosewood Dr., Jenison, with Rev. Howard Moths and Rev. Austin Vondracek officiating. Burial will be held at Floral View Memorial Gardens. Relatives and friends may meet the family Thursday from 11 a.m. - 1 p.m. at the church. Those who wish may make memorial contributions to Spectrum Health Hospice.

Leave Your Tribute
December 07, 2021 7:19pm
Many memories with Larry and his two sons, Cam and Matt. Larry was always going out of his way to do things for others. A good man and a huge loss to all who knew him. Our loss , heavens gain. RIP Mr. Randall, it was a blessing to know you.

December 06, 2021 5:31pm
Coach you have helped shape many lives. You will be greatly missed, may you rest in peace

December 06, 2021 3:26pm
As a shaper of young lives through basketball, Larry Randall truly deserved to be called Coach. Starting in 1968, when he first came to Jenison High School where I was a freshman, what I learned from him about how to carry myself both on and off the court is something that has stayed with me throughout my life. My condolences to those closest to him. Thanks, Coach, I will miss you.

December 06, 2021 8:58am
On behalf of the Aquinas community, we extend our deepest sympathy to Louise and all Larry's family. He touched so many young lives and was a great mentor. God grace you with Gratitude and Peace as you celebrate Larry's life among us and his Risen Life in Christ. Know of our prayerful support.

December 05, 2021 2:25pm
Larry was my gym coach in high school, very much respect for the man. He was firm but fair. I also had the pleasure of Larry being my father in law, he was always so funny, great sense of humor. I'll have a "pop" for ya coach. My deepest sympathies to Louise and the family, prayers to all.

December 04, 2021 4:03pm
Larry ---- "Dr. Tom" checking in one last time! The fondest of memories from my 2 year stint @ Aquinas College between 1985-1987. Great coach and friend. Have never worked for a better person in my 40+ years as an athletic trainer!! You were a terrific mentor and friend ----- RIP! Our sincerest condolences to Louise and the entire family. God Bless!

December 04, 2021 3:37pm
Larry was an amazing man who was always “for the kids”. He played a role in my career as athletic director, mentor, and friend at Jenison Jr.High. I always loved his lighthearted spirit and smile! My heart goes out to Louise and the family. Praying for peace and comfort during this time.