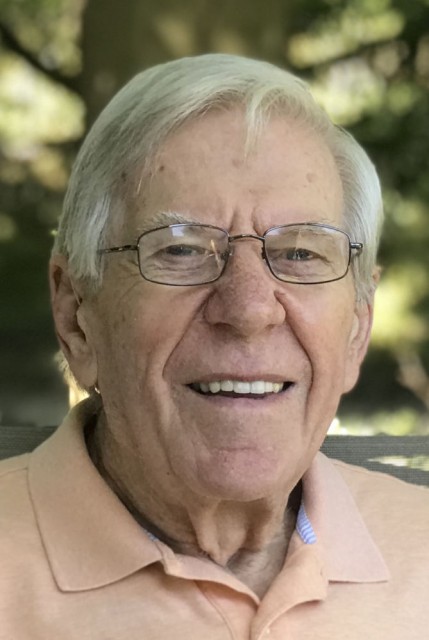 Dr. John C. Vander Stelt, age 86, of Grand Rapids went to be with his Lord on Saturday, September 19, 2020.  He was preceded in death by his parents; siblings, Case Vander Stelt, Elizabeth Verhagen, and Walter Vander Stelt.  He will be lovingly remembered by his wife, Sandy M.; children and grandchildren, David and Marcella Vander Stelt (Kyle, Riley, Spencer), Nathan and Kris Vander Stelt (Nicholas and Tori, Lydia, Joshua), Renee Vander Stelt and husband, Matt McConville (Helen), Rachelle (Vander Stelt) and Tom Knapper (Megan and Monte DeKam, Aaron Knapper).
Born April 5, 1934, in Dussen, Netherlands, John grew up on a family farm where faith was very important. Family, church, and Christian education were a tripod of life. Raised with a strong Dutch work ethic, John and his siblings put in long days between school and chores. John also lived through the horrors of World War II. The ravages of Hitler’s regime of terror, domination, death, and destruction left deep impressions on him. There were fierce exchanges between Allied troops and Nazi soldiers where he lived. Many told and untold stories of these wartime experiences left an indelible impression on him, leading to an unrelenting pursuit for justice, peace and compassion, especially for those who were often marginalized.
John became a Canadian landed immigrant on February 20, 1950, and soon after their family established another farm. In his teenage years he studied at a mechanical trade school and was active in the Christian young people’s society.  But John turned in his mechanical trade aspirations and farming work gloves and swapped them for books. Though the smell of potatoes and horseradish fields would always put a smile on his face, John plunged earnestly into God’s Word and a massive number of books.  He began to tackle important questions that seemingly only a small group of people in Reformed circles dared to ask or address. His overriding calling was to contribute to unpacking what it meant to have a Kingdom-focused world-and-life view that proclaims the Lordship of Jesus Christ in every sphere of life. For him, God’s sovereignty and shalom were not just concepts to be relegated to the classroom or the pulpit but, rather, realities to be lived out in everyday life.
John received his Bachelor’s degree at Calvin College, then studied at the Free University for two years, then came back to marry the love of his life, Sandy De Jong.  They married on September 16, 1960 and then moved back to Amsterdam to complete his studies in Philosophy and Theology. After returning to Grand Rapids, he then completed his Masters of Divinity at Calvin Theological Seminary.  After seminary he Pastored the CRC church in Newmarket, Ontario (1965-1967). John worked for the Institute for Christian Studies for one year and then in 1968, he accepted the invitation to become a professor of theology and philosophy at Dordt College (University) in Sioux Center, IA.  Several years later he received his PhD from the Free University in Amsterdam.
A passionate, challenging and stimulating teacher, preacher, and itinerant reformational speaker, John was globally minded, yet was locally grounded. Between developing and teaching nearly 50 courses at Dordt, including “Calling, Task & Culture (GEN 300), often preaching on weekends, and spending time informally meeting in their home meeting with students, colleagues and many international guests, there were many people whose hearts and lives were impacted.
Over the years there were many international conferences for IAPCHE where he was involved. Much of their travels around the world built many deep friendships.  When living in NW Iowa and not working, John’s greatest joy was spending time with Sandy on their boat on Lake Okoboji, IA. The two of them also greatly enjoyed traveling to see their children, and spending time with friends. John retired in 1999, and in 2006, he and Sandy moved to Kentwood, MI, to be closer to their children and grandchildren. When he struggled with neuropathy and progressive dementia in the past several years, they moved to Holland Homes. Sandy’s patience, love and care carried him through many difficult days, his inner joy and assurance was that God’s grace, strength and sovereignty would sustain him towards earthly finish lines.
While many Scripture passages helped lead John’s life, Micah 6:8 seems very appropriate: “He has shown all you people what is good. And what does the Lord require of you? To act justly and love mercy and to walk humbly with your God.”
A private family funeral service will be held at 11 am (EDT) Thursday, Sept. 24, at the Woodlawn CRC Ministry Center, 3190 Burton St SE, Grand Rapids, MI, with Rev. Mike Abma and Rev. Bryant DeKruyter officiating.  Relatives and friends may meet family Wednesday, September 23, 2020 from 6-8pm at Matthysse Kuiper DeGraaf Funeral Home, 4646 Kalamazoo Ave. SE, Kentwood or one hour prior to the private family service Thursday at Woodlawn Ministry Center. Due to gathering restrictions, there will be a limit on the number of people who may enter the building at one time. Masks are required. The service will be live online at: www.woodlawncrc.org/live-stream. Memorial contributions can be made to the Institute for Christian Studies (icscanada.edu); Dordt University (dordt.edu); IAPCHE (inche.one); or Association for Public Justice (apjustice.org).